Seirene is a very small cattery of Burmese cats, located in Helsinki, capital of Finland.

I had always thought that I was a “dog person” until my friend at the university took me to a catshow in Turku, Finland. After walking around one day among different looking cats, I got more or less interested in these beautiful creatures. Went to the library (that time Internet didn’t exist) and searched all I could find about cats. Got fascinated by the look of Burmese cat. One year later I visited again a catshow and was sure that I would have a brown Burmese, male of course. So, in summer of 1994 Vinku (Shanin Mindze) moved to my household from a small cattery in Tampere. Vinku’s breeder asked me to show him once and as for many others, I got hooked.

Year and a half later, a chocolate female kitten Lina (Misuela Evelina) moved in.

Seirene cattery is registered with FIFe since 1997, same year as the first litter was born. From that litter I kept a brown girl, Ronja, who became very well-known and famous for her beauty and fantastic show career.

During many years I was an active exhibitor, usually stewarding at the shows, but in the same time I was very active in our local club as board member and show organizer. Ronja, who really loved showing herself, brought me fame and honor and won everything she could win in her career. I started to think  perhaps I neeeded some new challenges in this hobby.

In 2007  I passed my short hair exam and became an international FIFe judge. Since 2011 I am also a semi-long hair judge. Life is an everlasting study, so now I am studying longhairs and oriental cats. Anyhow this is a hobby for me, not a work, so I do it rather slowly. I spend my weeks working and doing sports and some weekends I judge cats somewhere in the Europe.

Mira and  SC SW09, WW09, Seirene Justify My Love, JW, DVM, DSM. This photo is taken in 2009 in St. Gallen, Switzerland, where this young female from my breeding won the World Winner title. Vivi is owned by Marina ja Vanessa Forstén.

My thoughts about breeding

My idea in the breeding is: “Not quantity, but quality”. This means we have kittens very seldom and some of the litters have been raised by my good friends. Without them,  my breeding would be minimal, because I have only one fertile female at time at home.
This, because I want to keep breeding a pure hobby that doesn’t put too much rules and schedules to my normal life.

I am sure each breeder aim for breeding as healthy cats as possible. I test my cats for inheritable diseases as much as it is possible with gene tests.
Sweet temper is very important. During past years Burmese cats have  lost their sharp temper which I appreciate a lot. Type and looks is of course relevant when breeding pedigee cats. My goal is to breed cats as close to the FIFe standard as possible.

My “offspring” have been very successful in show arenas, from several cat of the year victories to even two World Winner titles. Nevertheless all my kittens are sold as pet quality cats. It is up to the owner to decide whether he/she wants to go to the shows or not.

It is possible to get a kitten for breeding with some special conditions. This does not necessary mean a contract with full of restrictions, but understanding and collaboration. Usually I assume some experience of pedigree or at least house cats.

Seirene Nabucco in his owner Justus’ lap. As you can see from the picture, Burmese cats make wonderful pets in families with children. 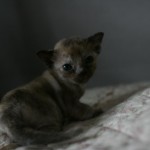